Nitrogen And Its Compounds In The Aquarium

In this article I will present the information that I have found to date. It was actually fairly difficult mainly because this is such a well known requirement that all the research was done well before the 1980s. As such most of the papers I present here will be standard references (not hyperlinked), but should be available at major university libraries.

First a quick lesson in the Nitrogen cycle. 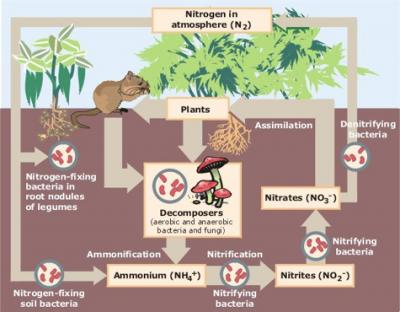 Now, this shows land, but where the cycle is slightly different for fresh or saltwater, I'll note the changes.

We'll start with the fish, since this is mainly what the conversation is about. Fish need nitrogen for literally everything in their bodies. Nitrogen is a primary component of every protein and strand of genetic material (DNA and RNA) in every cell of every organism on the planet. However, there is plenty of nitrogen available and organisms (including fish) have no problem finding sufficient nitrogen in easily usable forms. There's generally some nitrogen left over and (in land animals) that is excreted in the form of uric acid (urea AKA pee-pee).

However, fish do something very different, they excrete an amide called glutamine from their gills. The glutamine is hydrolized in water to produce glutamic acid and ammonia. ( http://www.elmhurst....3ureacycle.html).

The appropriate reactions are:

Other bacteria (called decomposers) also contribute to the nitrogen load of the aquarium. Uneaten food, fish poop, decaying plants, heck, even fish scales, are all consumed (slowly) by bacteria. This process releases ammonia.

Note for freshwater aquariests: It is true that plants will uptake ammonia, nitrates, and nitrites. This paper gives a lengthy discussion of the topic (http://www.hort.purd...ake/nu00001.htm)

Here's where the bacteria get started (see chart above). First bacteria that nitrify ammonium for their energy source (generally of Nitrosomonas or Nitrosococcus genus (at least for aquariums)) do the following:

What this means that the bacteria use a small amount of energy (2 electrons) and two hydrogen ions to create ammonium hydroxide and water. Then they convert the ammonium hydroxide into nitrite (NO2-), 5 Hydrogen ions, and more energy (4 electrons). It's not very efficient, but it's enough for these bacteria to live on. Note that there are 5 hydrogen ions produced for every 2 ions used... this increases the acidity of the water.

Now the nitrifying bacteria that work on nitrites go to work. These are generally Nitrobacter (freshwater and marine) or three other genuses in marine environments. They do the following:

This is where the nitrogen cycle in freshwater takes generally stops. These reactions take place in the presence of oxygen. Freshwater aquariests rarely go any further with this because the equipment necessary to create an anaerobic environment for the denitrifying bacteria is rare, expensive, homemade, or not needed because water changes are easier to do.

For the marine types, we'll take it one step further. The bacterial species Thiobacillus denitrificans, Micrococcus denitrificans and the genus Pseudomonas use oxygen as a terminal electron receptor which is why it must be in an anaerobic (without oxygen) environment. If there is oxygen, then even these bacteria don't really do what they are supposed to (at least for us). In marine tanks, an anaerobic environment is found deep in the pores of the live rock and deep under the sand (lower than about 3-4 inches) which is why a 6 inch sand bed is recommended. Note that any flow to an area renders this chemical reaction impossible (by pumping in oxygen) so there are no filters that can allow nitrifying bacteria to grow and flourish. The chemical reaction in these bacteria is as follows:

This is a good thing and what we want to happen. This reaction (and our friends the bacteria) convert the toxic (see below) nitrogen compounds back into gaseous nitrogen that has no effect on our tank.

Note the use of large numbers of hydrogen ions in this reaction. However, remember the above reactions, this only removes the hydrogen ions generated from the nitrite to nitrate step.

Also, something to keep in mind, cyanobacteria (often wrongly called an algae) does the reverse of this and converts gaseous nitrogen back into ammonium or one of the nitrogen species for use by itself and/or plants or true algaes. So if you have a cyano outbreak, all the nitrifying and denitrification bacteria in your tank are just barely keeping up.

This paper is critical for our discussion: https://kb.osu.edu/d.../OH_WRC_490.pdf

It describes the toxicity of various nitrogen products to the common guppy (Poecilia reticulus). {NOTE: This paper also describe the problems the researchers had in keeping the ammonia levels constant in the tanks as evaporation of the water caused the ammonia concentration to increase by 5% over four days. The tests also observed a change in pH from 7.5 to 6.9 in four days.}

When ammonia and nitrate are both present, LD50 occurs when the the concentrate of ammonia is .5mg/L and nitrate is 30mg/L at the same time.

So for the freshwater guys, water changes are a must. For the Saltwater group, water changes (for nitrogen and compounds) can be reduced significantly because of the availability of anaerobic environments in our sandbed and live rock (both in the tank and in sumps/refugiums). Please note that over time, the bacteria can grow and cause congestion in these areas such that nitrate removal is reduced. This is anecdotal as I have not seen any research on this topic.

There are no comments to display.